Most people in the public sphere seem to be of Se valuing types (in particular Beta and/or extroverted). This presents a problem: if we use celebrities as examples for people to learn from, then there is a deficit of certain types, which leads to a lopsided understanding. More of a conscious effort needs to be made to address these less common types. Today I will present a very clear example. 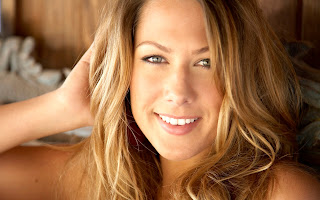 Colbie Caillat is a singer-songwriter in the "folk pop" genre, which generally means an acoustic guitar paired with one or two singing voices. Already this shows a preference for soft, pleasant, and naturalistic sounds (Si), as opposed to the predominant "Top 40" pop sound, which tends to be harsh and impactful (in both sound quality and themes, like violence, drugs, and sex), electronic, and good for dancing or pumping up the energy level (Se).

Although she did intend to pursue a singing career, her actual ascent to pop-stardom happened somewhat by chance: a friend posted her music to MySpace, where she developed a grassroots following, and got signed later because of this. In fact, it doesn't seem like she is the kind of person who naturally seeks fame or is even comfortable with it: she says about her experience of failure on American Idol: "I was shy. I was nervous. I didn't look the greatest. I wasn't ready for it yet. I was glad, when I auditioned, that they said no." She also describes the physical difficulties in touring and playing music according to a strenuous schedule, as famous artists usually do. This attention to physical qualities is ever-present in Caillat's thinking, which indicates most likely an Si leading or Si ego type. She also worked as a masseuse earlier in her life, a very Si-heavy occupation, and has visual art interests like photography and painting.

While Caillat is friendly and open emotionally she does not express a very wide range of emotions or seem to be prone to emotional excitement. But she emphasizes her relationships with (and maintains a strong connection to) her immediate family and friends and her local community. In fact, her father produces some of her music — she praises his skills, but with her fame clearly she could have chosen somebody else for the job. Her music also tends very much to the "sappy", "sweet" side rather than the emotionally charged or uplifting, which is typical of folk pop. (I don't advocate using an artist's creative work as a sole method of typing, but depending on how much creative control they have, we can see some strong correlations.)

So, overall SLI is most likely. LSE is worth considering also but it would have to be one of the two. Overall there seems to be much more emphasis on Si than Te, although her use of Fe might indicate greater strength than Fe Vulnerable. Caillat made a song about the use of Photoshop that betrays a very common Se vs. Si conflict that may be described as "naturalism vs. control." One area where this conflict arises is in physical appearance.


"I'm against the ways of the world where people feel like they always need to make things look too perfect."


She says she doesn't come up with ideas for songs "in the grocery store" for example, but has to be at home on her guitar, suggesting weaker Ne and stronger Si.


Lots of Si themes both in her music and lyrics, as well as Fi.

[when asked for advice for new artists] "Learn your craft, whatever it is."
"I'm super mellow"
"Music's supposed to make you feel good and smile"
"Family comes first."
Posted by Ibrahim Tencer at 3:49 AM No comments:

Today I want to talk about some misconceptions that people have with socionics. Certain misconceptions about socionics tend to come up again and again (along with confusions with MBTI and Jungian typology).

The first is that, if something is type-related, then it necessarily applies to all people of a type (or quadra, or other category). As described previously, there are different manifestations of each socionic category. While many characteristics are typical, very few are universal. It's important to become familiar with many of the major manifestations for typing purposes. For example, one SEI may have a "goofy" or silly demeanor while another one may be more chill and laidback. If I use one of these as evidence of someone being SEI, it doesn't necessarily negate the other one — it's simply a different manifestation.

The second misconception is that type-related traits can't be positive or negative. I see where this one is coming from. In systems like Myers-Briggs you essentially have certain types that are better than other ones. In socionics this is not supposed to happen: every type has its place in the world. But again, this does not mean that every manifestation of IM is neutral. All of the types can display poor behavior — but they tend to do so in very different ways. Again, failing to recognize this prevents you from accessing a lot of useful information, since people's foibles are almost invariably "colored" by their sociotype, and therefore can be used as evidence of it.
Posted by Ibrahim Tencer at 12:27 AM No comments: